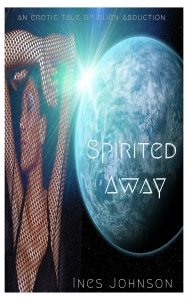 Chen’s mouth probed hers deeply. His tongue sought her heat, her secrets, her surrender. Shanti clung to him. She climbed his body, wrapping her legs around his strong torso. He entered her, plunged himself inside of her, to the depths of her, until he touched the very essence of her. His tentacular petals wrapped around her sex; at her clitoris in the front, and her anus in the back. Chen claim her body and soul.

He pushed impossibly deeper into her until Shanti saw tendrils of energy wrap around her heart, her mind. It was a full scale invasion, and Shanti gave herself over to him. And then she felt another set of hands at her waist. She opened her mind’s eye to see that the hands were identical to Chen’s, only a darker shade of blue. Shanti broke the kiss with Chen. His light eyes smiled at her, open, welcoming, full of love and adoration.

Shanti leaned her head back. Looking over her shoulder, she was met with a dark gaze. A harder gaze, full of wariness and resignation. The floating sensation receded.

Without warning, Chen released her. Her body fell. But before she could hit the floor, she opened her eyes.

Shanti stared at the ceiling. Immediately, she knew she wasn’t in her bedroom in Maryland. The walls of her bedroom were painted a light shade of purple. Her room was feng shuied to lessen anxiety and increase her sexual attractiveness. Her windows faced her backyard in the east where the sun rose each morning.

There were no windows in this room. No light fixtures either. But a soft phosphorescent streamed in. The room was a startling color of white with fixtures of every shade of blue.
Shanti was not in her energy aligned bedroom.

She was not in the dingy sleeping quarters of the ashram.

She was not dead from the scorpion’s sting as she had previously believed.

She was in the blue bedroom, of the blue alien who had abducted her from Earth.

Well, he hadn’t abducted her exactly. She had come willingly. Willingly, but under false pretenses. Pretenses that he’d taken advantage of for his own gain.

What was his game?

Shanti ran her hand over her eyes. Her mind raced through all of the abduction stories she’d ever seen, read, or heard. Aliens abducted humans to run tests on their bodies. They abducted women to breed their wombs. Shanti’s hands glanced over her belly. It was still flat.

Shanti sat bolt up at the sound of the voice. Standing at the end of the bed was a small boy. Correction, small alien boy. He had the same coned head as Chen. The same nodes instead of hair. The same large eyes. The only difference, this boy’s skin was a light tan color, a few shades lighter than Shanti’s skin…

Blue and brown didn’t make tan. Did it?

How could Chen have done this to her? She had trusted him. The last thing she remembered was Chen trying to calm her. Then her vision went blurry and she began seeing double.

She remembered feeling Chen’s gentle hands on her, lulling her into a calm state. But her eyes remembered seeing a darker Chen standing in the corner, like he owned the place. Like he owned Shanti. The double-Chen had called her their mate. Maybe Chen had a split personality? Maybe he could duplicate himself? Maybe he was Dr. Jekyl and Mr. Hyde? She had no clue. He was a freaking alien.

Had he taken advantage of her while she’d been out. Beneath the blankets Shanti was completely nude. She clutched the blankets to herself as she eyed the young boy. Her son?
“You have been asleep for the duration of a tidal phase.”

The boy’s lips didn’t move, but Shanti heard him clearly. She just didn’t understand him.
The boy grinned even brighter. “I believe on your planet the tide pulls in a measurement called…hours. That means you have been asleep for twelve hours.”

She couldn’t have gotten pregnant, given birth, and had this child grow this much in that amount of time.

So they hadn’t impregnated her.

First thing’s first. She needed to get dressed. She spied her suitcase in the corner. She scooted to the edge of the mattress. Her bare leg peaked out from under the blanket. The young boy watched her with wide-eyed curiosity.

“You appear distressed,” he thought at her.

Shanti shook her head to clear it of his childish voice. “Will you get out of my head, please.”
The child blinked and stepped back.

Shanti felt a moment’s shame for snapping at the boy.

He opened his mouth to speak. The words came out slowly as he enunciated each sound. “My apologies. Chen said you preferred vocal speech.”

The child cocked his head in confusion.

“I want to get dressed.”

His face brightened as understanding dawned in his large eyes. He turned and went to her suitcase. He hefted the satchel with ease and brought it to her. “You have so many robes.” He popped open the lock as though he’d done it before. “Eloh only have two robes. One for ceremony and one for duties.”

“Did you go through my things?”

He nodded without shame or guilt, large eyes eager.

“Obviously.” Shanti grabbed a pair of jeans and a t-shirt from her case. She prepared to drop the sheet when she saw the child’s eyes still watched her. “What’s your name?”

“My name is Niao. And your name is Shanti.”

“Niao, I want to explain the concept of privacy to you.”

He nodded eagerly, apparently excited to learn something new.

Niao frowned once more. “But we are never alone. We are all one.”

Impatience and anger rippled through Shanti’s blood. At first. But then she realized she’d heard these words before. She’d heard them her whole life, from her parents, from her spiritual teachers, from her own mouth.

Everyone and everything was interconnected.

There was no self.

But none of them had ever been abducted by Buddha-looking aliens.

She sighed as she looked into this child’s face. “Niao, I’m naked under this sheet and I’m uncomfortable being naked in front of you. Would you please step outside the door while I put my clothes on?”

“We can’t leave you alone.” The voice did not come from Niao. It was a deeper baritone than Niao’s higher pitched voice.

Shanti turned around to the other corner of the room. Lounging against the wall was another young boy, though the harsh look on his face made him look more mature. His face was the exact same shape as Niao’s. Only his eyes and skin were a darker shade of brown.

Shanti looked between the two. The boys could have been twins. Likely were twins. Just like Chen and double-Chen.

“Hsing-I sent us here to protect you,” said the darker boy. Shanti noticed the staff in his hand.

“Your bondmate, of course,” said Niao.

“But Chen said that he was my bondmate.” Another lie?

“Chen-Na and Hsing-I are brothers,” said the darker one. “They are both your bondmates.” He spoke to her as though she were a child.

Shanti’s hand reached out to the headboard of the bed. She hadn’t been seeing double before. That second Chen, Hsing-I, had been real. And he was supposed to claim her too?
No way. She was getting off this ship right now.

Shanti grabbed her jeans and pulled them on beneath the sheets. She turned her back on the watchful children and pulled her shirt over her head. Then she turned and marched for the door.

“Where are you going?” said the darker one.

“Home.” Shanti reached the door and looked for a handle, a way out.

“Watch me.” But she couldn’t find a panel or a handle.

The dark one came round appeared at her side and placed himself between Shanti and the door. “Hsing-I gave me a mission to protect his mate, and I will not fail him.”

“Protect me? You’ll need to protect him from me once I get out of here.”

A loud noise sounded through the room and then a loud bump knocked them all off their feet. It felt as though they were on a ship at sea that hit rough waters. Then Shanti remembered, this was a ship. But she doubted they were in any ocean.

“What’s going on?” Shanti looked around the room.

Niao came to help her to her feet. His brother stood over them with his staff. “We are under attack.”

Stay tuned for next week’s installment

One thought on “Spirited Away Chapter Eight”